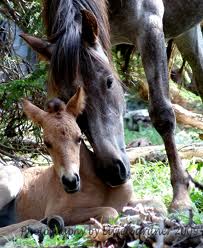 Perhaps I have too tender a heart; my eyes burn and my heart aches so much that I have to take a few minutes to let the overwhelming tragedy befalling our nations wild horses reseed before I can continue.

“This week’s “gather” of some 2,500 wild horses from Nevada’s Calico Mountains marked the Bureau of Land Management’s latest bungle to “balance natural resources.”

“If you could look closely into the eyes of the horses – corralled in a subzero chill and bathed in sweat that freezes to their hide – you see terror. With eyes bulging, they blow steam from their noses that hangs in the frigid air. These are traumatized animals who do not quickly settle, as BLM misleadingly tells the public.”  – Kinship Circle

Some say the wild horse is no longer automatically considered deserving of extensive protection; some environmentalists and scientists have come to see the mustangs as bullies, invaders who disturb the habitats of endangered tortoises and desert birds. In a 2006 article in Audubon magazine, wild horses lost their poetry and were reduced to “feral equids.”

The Bureau of Land Management’s quest to ‘balance our natural resources’ (these beautiful horses) is bringing horrific consequences to them. After reading the story first in the Kinship Circle, then in the New York Times and their similar story ‘On Mustang Range, a Battle on Thinning the Herd’ I’ve been possessed by wild horses. I’ve called President Obama, Vice President Biden, the Department of Interior and the Bureau of Land Management, as well as sending letters, conveying my deep concern for what’s happening to one of our most precious national treasures – wild horses. The message I left urged them to establish a committee of environmentalist, animal scientist, animal welfare advocates, ranchers and anyone else who desires to see a better solution to the Bureau of Land Management’s current approach to ‘managing our resources’!

Wild horses comprise a minute fraction of grazing animals on public lands, where they are outnumbered by cattle at least 200 to 1. The 1971 Act states that, in a given area, a certain amount of vegetation may be eaten as forage. Only when that amount is exceeded are there too many animals. The Bureau of Land Management (BLM) has overwhelmingly favored cattle in setting “appropriate” wild horse population levels, resulting in indiscriminate removal of horses and burros from public lands. From over 2 million in 1900, our wild horse population has dwindled to less than 25,000. For more information, please check the numbers.

“The battle for our wild horses will be won in the court of public opinion: the government needs to face a sustained public outcry over its wild horse management practices. Did you know that Congress counts each letter received as the opinion of ten people” – The American Wild Horse Preservation Campaign (AWHPC)

Please take ACTION. The AWHPC has a list of suggestions to help keep up the noise and spread the word.